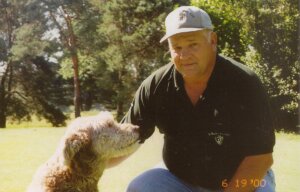 Henry Wetzel, with beloved dog, Bill, in June of 2000 on the course at St. Davids

July 20, 1970
[first installment in the #HeadingTo100 series as the PAGCS prepares to celebrate its Centennial in 2025]

This is the day our plane landed at McGuire Air Force Base in New Jersey with a load of happy Army Vietnam Veterans returning home. When I hear the saying, “There is no place like home,” I think of all those happy vets.

Mom and Dad Repsher, wife Linda and then six-day-old young Henry drove right out onto the tarmac to the plane to pick me up. If not for the draft, I would not have spent my three years after graduation [from then known as Delaware Valley College] in the Army. However, I learned discipline and respect for our country. We sure could use that today.

[Henry is a former PAGCS Board Member, serving a total of 30 consecutive years, 27 of them as Secretary. He was awarded the 2012 Eb Steiniger Award.]